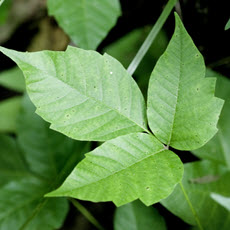 Teach your child to recognize poison ivy: “leaves of three, let’em be!”  Recently we’ve had a parade of itchy children troop through our office. The culprit: poison ivy.

Myth busters: Fortunately, the rash of poison ivy is NOT contagious. You can “catch” a poison ivy rash ONLY from the plant, not from another person.  Another myth buster: You can not spread the rash of poison ivy on yourself through scratching. However, where  the poison (oil) has touched  your skin, your skin can show a delayed reaction- sometimes up to two weeks later.  Different  areas of skin can react at different times, thus giving the illusion of a spreading rash.

Some home remedies for the itch:

However, infections cause pain – if there is pain associated with a poison ivy rash, think infection. Allergic reactions cause itchiness- if there is itchiness associated with a rash, think allergic reaction.  Because it usually takes time for an infection to “settle in,” an infection will not occur immediately after an exposure to poison ivy.  Infection usually occurs on the 2nd or 3rd day of scratching.  If you have any concerns take your child to her doctor.

Generally, any poison ivy rash which is in the area of the eye or genitals (difficult to apply topical remedies), appears infected, or is just plain making your child miserable needs medical attention.

When all else fails, comfort yourself with this statistic: up to 85% of people are allergic to poison ivy. If misery loves company, your child certainly has company.