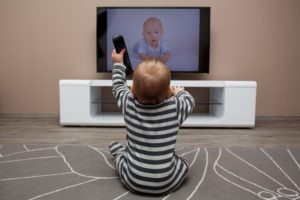 Hoping to give your baby a leg up on learning — and give yourself a chance to catch up with chores? Thinking you could accomplish both in a flash by propping your little one in front of the TV and popping in an educational DVD? Before you hit “play,” it’s important to know that babies and TV — or really, ANY kind of screen time — don’t mix! Here are some reasons why:

Babies don’t learn from TV. Babies don’t “get” TV. They’re mesmerized by the lights and sounds, but study after study has shown that infants can’t learn from screen time. The images may capture your baby’s attention, but they won’t make her smarter. Educational DVDs and TV really aren’t. Those programs may be marketed as educational — claiming to boost brainpower or jumpstart reading. But the research tells another story — that language development can actually be significantly slowed down by those programs. That’s because a steady diet of screen time often means less parent-child time.

Babies learn best from people. The more your baby interacts with you, her first and best teacher, the more quickly she’ll master her mother (and father) tongue. In other words, your little one has a lot more to learn from a simple game of “Where’s your nose?” than from a stream of characters on a screen.

Don’t leave TV on all the time. Do you often keep a TV on in the room you’re in, just for background noise? Or even keep the news or game on mute so you can keep an eye on the headlines or the score? It’s time to power off. Even when it’s not being actively watched, TV can be surprisingly distracting — not just for adults but for babies. In fact, a little one will shift her gaze to a TV that’s playing three times every minute! That time, of course, is better spent interacting with you — or playing on her own.

Doctors discourage screen time for babies. And finally, The American Academy of Pediatrics strongly discourages screen time for infants and toddlers. Studies have found a connection between excessive TV viewing and an increased risk for attention problems, obesity, and poor school performance. There are way better ways to boost your little one’s IQ, including unstructured play time, which allows babies to think creatively, solve problems, develop reasoning and motor skills, and even learn to entertain themselves — no remote required.