Connecting with the Outdoors

In 1982, the Japanese Ministry of Agriculture coined the term “Shinrin-yoku,” which literally means “forest bathing” or “taking in the forest atmosphere.” In the years since then, studies in the Japanese literature have shown that spending time in the forest can reduce both the physiological and the psychological symptoms of stress. A literature review conducted in the UK indicated evidence that natural environments have direct, positive impacts on wellbeing, and can improve healing time, depression, and attention-deficit hyperactivity disorder. Some other important benefits include improvement in: 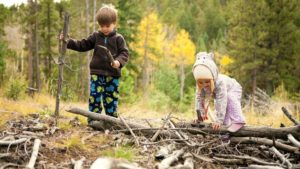 Overall, spending time in nature and experiencing its wonders via all of our senses can help rebalance and revitalize our minds, bodies, and souls.

Modern urban lifestyles generally are not conducive to spending time in natural surroundings. In today’s cities, high urban density, perceived (and real) outdoor dangers, and over scheduled lives lead to an epidemic of isolation from nature. “Nature-deficit disorder,” a non-clinically recognized disorder, has been used to describe the expanding separation that children experience growing up separated from natural space and overloaded with stimuli from the varied electronic gadgets of today’s world. Obviously, adults experience this too. This is not without consequences. Richard Louv, author of Last Child in the Woods (2005) and The Nature Principle (2012), says that nature-deficit disorder affects the “health, spiritual well-being, and many other areas, including people’s ability to feel ultimately alive”. Additionally, lack of interaction with our natural world may increase attention deficit disorder and contribute to a disconnect from the need to care for our natural environments.

An area gaining recognition in the mental health literature is the benefit of “green exercise”. A review evaluating the impact of indoor versus outdoor exercise on mental health, found an overall positive association. They found that people who exercised outside had less tension, anger, confusion, depression and a greater enjoyment and satisfaction with outdoor activity. They also discovered increased self-reported improvement in mental wellbeing immediately following outdoor exercise compared with indoor exercise. This helps indicate that physical activity in natural environments is better for mental health than physical activity elsewhere.