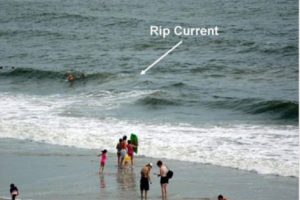 Summer is here and many people are heading to the beach. Riptides  can turn a fun beach trip into a not so fun beach trip! Here is what you need to know!

Riptides or currents, are long, narrow channels of water which move from the shore to the sea.  These currents are so strong, they can take even the strongest of swimmers with them. As waves come into the shore, water piles up and needs somewhere to go. Instead of returning over the reef or sandbar from which it came, the current may take the path of least resistance and funneled into a channel between two obstacles. Riptides increase in frequency during hurricane season and tropical storms.

80% of all open water rescue attempts are due to rip tides and they claim over 100 victims a year.

Riptides may look like a channel of foaming, churning or choppy water. Riptides pick up seaweed and debris in it. They also pick up sand, so the water in that area may appear a different color. Riptides may also look like a “break” in the incoming tide.

What to do if you get caught in a riptide:

Remember: never let kids play in the water by themselves. Water can appear shallow with a riptide!!